Well the hash was small and the circle even smaller. Hashers are now becoming departees before we get the opportunity to wish them good riddance and drink a farewell toast to them. In the case of a Dr. who may have been a witch dr. he even left halfway through the circle. Anyway, back to trivial matters. Do take everything written here as literal as it is always written exactly and as accurately as it was said or appeared. The responsibility therefore lies with your own flapping tongues and imaginations.

We lost our walking hare before the first round of invitations to the circle had even started for reasons unknown at that time and all I heard after lookalikes were sought out was that Salama said it was hard to find but he came anyway. A late walking and constant talking Aye, aye, aye rambled on about a black mamba and everyone thought she was talking about her love life so we left her alone.

Why was she born so beautiful? We don’t know, but ‘Slapper’ still turns up with broken feet and does not wimp out at the thought of another run around the peninsular on one leg or two to celebrate part of her 21st birthday with us. Hashy birthday from all who were there last night and shame on the rest of you for not turning up to sing to her. You rotten bastards, especially the ones who attended last weeks hash and said they would be at this one. The hash eventually catches up with all of you.

Regular features of the circle this evening were the Pope, the Rotossary and the Aye (aye,aye). General talking and lack of respect for the circle saw them each on more than one occasion having a drink. They still wouldn’t shut up though. Starting off then, the Pope on a Rope was pulled in for disrespecting the hashit, not wearing it and trying to leave it in Baggie after he was worthily and justifiably nominated to wear it.

Now the walkers, especially the female ones, were shrieking that they had eyed a trouser snake on the walk. The runners didn’t feel the need to inform anyone that they had seen breasts on the run but nonetheless the walkers would still shriek for a bit longer about this story. Bottom line, the harriettes who had seen it were in, along with Hitler and Boxer (apparently they have a joint membership to the Black Mamba club), and Panty we now discovered had also seen it and was last seen driving off in the direction of the said sighting. Read into it what you will, usual ending though, song and a drink.

There were so few misdemeanours as it was such a well behaved hash that those who hadn’t had a drink were pulled in to help reduce the copious amount of beer laid out on Banzais work bench. A hard to believe bunch of departees including Hitler , Second Cumming, The Pope, Salama and Glitter came in for another down down to avoid being slagged off at next weeks hash in the event they don’t make it. Virgins were thin on the ground, so Aye, aye, aye still talking in the outer circle was pulled in as a born again virgin. She’s been making quite a regular appearance centre stage at the last two hashes. Anyway, not happy being pulled back in she was now harassing young hashers and leading them astray. Leave Mikkel alone please, his mother reads this.

Hashit, what a disaster this has become. It now consists of a toilet seat, a pair of socks and something pink or purplish tied to the said seat. As boxer was hashit last week we can only assume that he washed it and now wears it around the house as comfortable evening wear. Whatever flicks your switch or floats your boat. Nominees for the evenings prestigious award were an unlikely couple in the shape of The Pope on a Rope and Rotossary. They were first in the circle this evening for sex on the trail and now they were nominating each other like a couple of divorcees. The Pope earned his place for leaving the hashit on a wall in Bagamoyo and not wearing it and Rotossary was in for mounting a Pope. Aye, aye, aye shared the final nomination slot for cougar antics in the outer circle and the first round of voting was underway. Aye, aye, aye was out and the happy couple would now show how much they didn’t want this award. The Pope did get off lightly and drank his down down to a note of Fxxx off from Rotossary who then led us to dine on Arizona’s finest burgers after a quick Swing Low from the crowd.

OnOn to my gaf next week. I think its Thai food as well.
SLAS 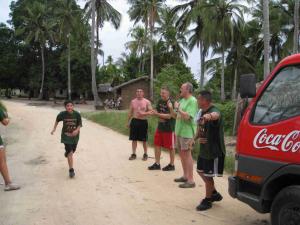