Well the circle opened with a welcome to various hashes of varying numbers until we agreed to disagree on what number run it was. It might be run 1561, it might not be. It was immediately noted what a lousy and lame turnout it was and how many light weights there are in Dar who cannot handle hashing three days in a row. Man up a bit hashers, even Kili and Sparkle were still going strong on day three. Missing hashers names have been noted and taken down and will be used against you in future hashes.

The hares were welcomed with a lousy and pathetic version of ‘and the Hares’ and at the first shout of ‘Howwww Maneeeeeey!’ it was noticed that Banzai was not there. He was in fact outside guarding Salama Stubby’s bike which was still tied to the roof rack of his car, last used on Saturday, sometime, somewhere, between Dar and Baggy. Those Japanese knots are tough to untie. With Banzai back we were able to restart another lousy version of ‘and the Hares’ with everybody present. Elephant Balls had a good one running and Aye, Aye , Aye had a dirty one walking. I did notice when Elephant Balls was called in to the circle that a number of the Harriettes eyes glanced south as he walked in. They subsequently looked up again slightly confused that they couldn’t work out by themselves how he came by that name.

Next Weeks Hash was unknown, due to people who know, not knowing they should have been hashing on Monday night. So a lookalike to nobody that nobody knew was not found. The RA subsequently broke out the large ice blocks, delivered it centre stage and the circle has never been so quiet.

The GM called in Twitcher for bad parenting. Earlier, she had left Sparkle with a full bladder and no paper in the capable hands of the GM and gone off running. Sparkle was also called in for being that poor overloaded girl who failed to inform the GM until they were packed up in the car and moving. At this point Strap On was singled out and her sexuality brought into question. All she did was shave her head. Fortunately, she was being questioned by a seven year old Sparkle and not some lecherous bi-curio Hasher. As was already noted earlier they were all absent this evening. The ice was christened soon after and the singing as always was slow whenever the ice blocks come out.

Aye, Aye, Aye was now centre stage with the GM intent on informing us of a few things that were not brought up in Baggy as some hashers had left early with stories of aching teeth and flooded rooms. It was understood that Aye, Aye, Ayes waters broke in the GM’s bathroom but the panic stopped when Wounded Knee stuck his finger in the hole. GM told us he had the best shower with Aye, Aye, Aye in it.

Hash Cash jumped in to grass up boxer for not paying. He could not believe he was a Hare with no ‘hair’ or ‘fringe’ benefits for being a Hare. Running at the back is running at the back, Hare or no hair. Other misdemeanours included Twitcher for leading the pack astray at every checkpoint as she proceeded to get every check wrong and nobody else wanted to open their mouth for fear of receiving a frozen arse shortly thereafter. So that was it for misdemeanours. On the ice they would go and a song would be song. No. Boxer was not playing along tonight and was just accumulating points for a later award. Some icy words were exchanged and the entire family of Twitchers then sat cheek to cheek on the ice as we serenaded them with words about being true blue and good hashers.

Returnees included, Popcorn, fresh out of a Bordello. Elephant Balls has making a slow return from Dubai (well, if you had to drag them along it would be no faster). Hash Dance who just hasn’t been turning up and Kim for whom I have no idea. This is not Inspectors Gadgets ‘Kim’ but a real life Kim. However, when the said Hash Hound does return it will also be a returnee.

No Departees were upstanding, so it is fully expected that everybody from the lousy turnout hash will be at next weeks hash. All your names have also been noted and taken and will be used against you in the event you are not sighted at the next Hash. Sadly, our solitary virgin this week was of the gentleman persuasion so attention was not given to the fullest degree. For the record though, we were joined by Tim from Cyprus who made himself come and he likes it standing up. Also for the record, it is not just Tim but most ladies like it standing up.

Drinking alone is not something common to the Hash and with a large block of ice available and still not defrosted, Tim thought it fitting that Penguin from Easyjet should join him on ice during his welcome song. With such a lot of ice still available to cool people down on, the circle reverted to the Baggy weekend and brought up crimes of driving in order to fill the available ice spaces. With one pilot already on ice, Gary Glitter stood in for Wags who had tried out part one of her flying lesson in the company milk float at the weekend and without Tiny Sausage being present (your name is in the book) Hitler had to take the stick for the breakdowns, delays and bush traffic jams created by Tiny’s unreliable VW. Warm Safari was sung in the usual manner and we are all really looking forward to the day when Kilidogo’s voice breaks.

Hashit is becoming a thing of the past and it is regularly not there or being worn by the worthy nominee from the previous hash. This was the case today as well. So, with Captain being a lookalike for Bum Titty and giving us another chance to sing Bum Titty, Bum Titty, Titty Bum the gates were opened to let in this weeks nominees for Hashit. They were Boxer Goldstein, for not paying. Polar Boxer, for refusing to sit on ice and Squabble Boxer for causing disputes. It was a close call between the three of them but eventually the GM made a democratic decision and awarded this prestigious and noble award to Boxer. Long live democracy.

We finished with a couple of verses of Swing Low to Boxer, Tim and Captain and then followed them up stairs to a lovely terrace with chairs, candlelit tables, metal cutlery, no mosquitos and a gentle breeze passing through. It was here we noted what a beautiful evening it was without all those noisy unruly hashers around. 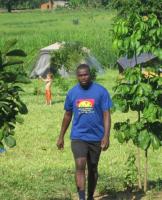